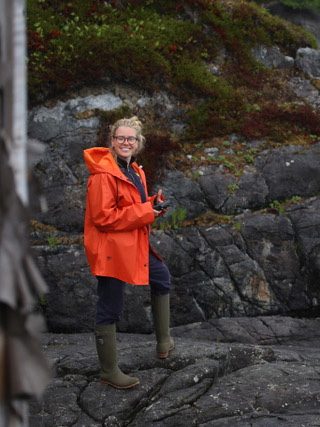 About Éadin N. O’Mahony: Éadin, pronounced ‘Aid-een’, is an Irish-German marine biologist, coastguard rescue officer and novice potter. When she was a small child, her family moved from the urban jungle of Berlin to the wild Atlantic coast of southern Ireland, where her love of the sea was nurtured. During her undergraduate degree in conservation biology, Éadin had the opportunity to work with the North Coast Cetacean Society, or “BC Whales” – this becoming her very first visit to British Columbia’s Great Bear Rainforest. It didn’t take long for her to get hooked, recognising the integral part whales play in ecosystem health and human conservation efforts. Éadin continued to work with BC Whales for her Masters (by Research), collecting whale blow with drones as a source of DNA for population genetics research. She has just embarked on her PhD journey, together with BC Whales and the University of St Andrews’ Sea Mammal Research Unit (SMRU). Her PhD aims to bring together new and non-invasive genetic sampling techniques, aiming to develop a coastwide biomonitoring network that investigates biodiversity levels in relation to Marine Protected Areas. She is passionate about bringing people and nature together, and dreams of this project bringing together knowledge, biomonitoring tools, data and a care for the sea, to help local communities lead on the protection of their seascapes. Her winters are spent in Scotland, her summers in BC, and she is at her best when out in the elements, in, on or under the sea.