February 24, 1996 marked the opening of the Rainforest Interpretive Centre (RIC) in Tofino at 316 Main St (next door to Tofino Sea-kayaking). The Long Beach Model Forest Society (LBMF) hired Adrienne Mason to create the design for the Centre in 1995. Adrienne worked with the LBMF Board and designed the Centre to cover four main themes: LBMF and the model forest program across the country; temperate rainforest ecology; the connections between people and forest; and research within LBMF. A diverse group of people from the forest industry, the environmental movement and First Nations were involved in the conceptual design. Many artists and craftspeople, mostly locals, created beautiful informative displays that are still featured in the RIC. These include the mural, the First Nations display, the wooden globe, the fabric panels and others.

The RIC space at 316 Main St had previously been a Forestry Visitor Centre and was donated to LBMF by MacMillan Bloedel (MB) from 1996 to 1998. In addition, Frank Hillier, a retired MB employee, and Bill Perry, a forestry contractor, were retained part-time to help answer visitors’ questions at the RIC. They worked along side the program coordinator and interpretive staff hired by LBMF.

MB sold their operations to Weyerhaeuser in 1999 and, in preparation, they sold the building at 316 Main St. in 1998. Consequently LBMF was faced with moving the RIC to a new location and paying rent. In addition, the staffing arrangement for the RIC shifted. Frank and Bill could no longer continue their role as representatives of the forest industry in the Centre. This caused concern among industry partners on the LBMF Board. As a result, a consultant was hired to review the RIC programs in the spring of 1999, and in particular, to assess how well industrial forestry was being presented at the Centre. Several additional displays and program ideas were recommended.

The committee responsible for developing the RIC’s annual workplan and budget was unable to convince the LBMF Board to provide all the funding required for operations in 1999-2000. Instead the Board directed the committee to build a business plan and seek a portion of the funds from other sources.

By Spring 2000, the LBMF Board decided they would no longer fund the RIC. They provided a small amount of transition funding and devolved the Centre, including all its assets (displays, etc.), to a group of community members who were determined to keep the RIC open and its educational programs alive. The Raincoast Education Society was born in August 2000 and the RIC’s name was changed from Rainforest to the Raincoast Interpretive Centre to reflect a broader mandate.

The Long Beach Model Forest Society carried on for an additional two years until funding from the Canadian Forest Service was discontinued. During those years, LBMF focused on a variety of research and monitoring projects dealing with First Nations and applied forest management. One of the greatest challenges faced by the LBMF Board of Directors involved building respectful relationships with staff. The Society dissolved in part because a lawsuit threatened to misappropriate program funding.

NB: original stated intent of LBMF in establishing the RIC was that the RIC would eventually be handed over to local communities. This is referenced in the vision document that Adrienne prepared; an excerpt was included in the original transition plan proposal that the Interpretive Centre Working Group (the forerunner to the RES) made to LBMF. 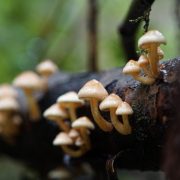