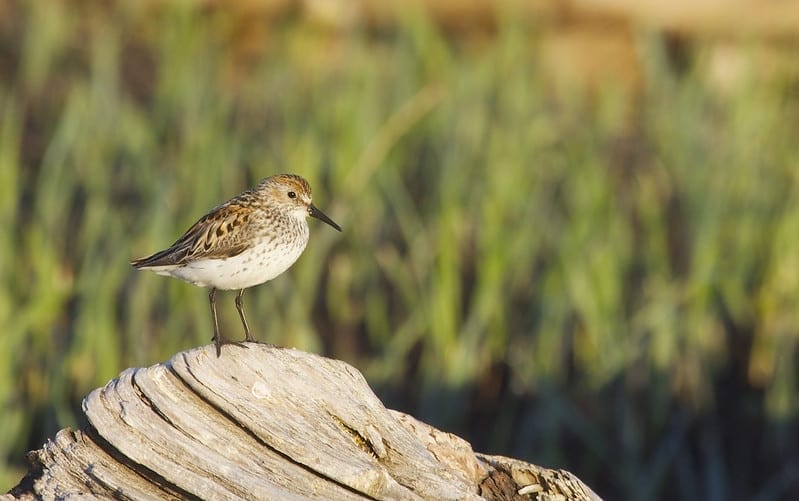 I recently got into a conversation with someone to whom I was trying to explain in general terms why we were trapping and counting birds all spring. I mentioned the general scope of the work explaining that we are counting them to learn how many birds pass through each year to get a better idea of how those numbers might change from year to year or even over longer time scales (we are seeing increases of some species, declines of others). I explained how we trapped the birds using long and nearly invisible mist nets strung out like volleyball nets on the mudflats, and how once we caught them we would glue tiny little radio transmitters onto their feathers to track them to learn more about where they spend their time and how long they stay here for (the tags are harmless and fall off after a few weeks). I was trying to keep my descriptions as simple and straightforward as possible, but my enthusiasm must have led me to get a bit more technical than I would have intended. My friend laughingly brushed me off “Oh gosh, this all sounds so scientific! I barely know anything at all about birds, I don’t even know where they come from or what they eat!” I paused for a moment and collected myself before pointing out that actually, neither did I! There is a common misconception that scientists have answered all of the easy questions and have moved on to increasingly abstract or specific queries. While that may be true in some fields, my own experience as an ecologist has been almost exactly the opposite – we spend absurd amounts of time in the field, year after year, getting wet and dirty trying to answer the most basic possible questions about the plants and animals around us. We’ve probably learned enough about shorebirds that I can feel confident about writing a short piece for Tofino Time, but what keeps it all so exciting is just how little we do know, and how much opportunity there is to try and answer cool questions about the natural world right here at home. So, without further ado here is a (fairly comprehensive!) summary of what we’ve learned about shorebirds so far here in Tofino:

WHO: The Tofino area annually hosts 20-30 species of shorebirds – a very high diversity – but something like 90% of the total number of birds passing through each spring are Western Sandpipers. Surveys and tracking are helping us generate increasingly accurate estimates, but it’s likely at least 200,000 Western Sandpipers per year in ‘low’ years, and possibly as many as 800,000 in ‘high’ years. This represents between 5-20% of the estimated total population of 4 Million birds.

WHAT: Western Sandpipers are lovely little shorebirds weighing just over 20 grams. They stop here to feed for a few days each spring en route between their wintering grounds in Central and South America and their breeding grounds in Arctic Alaska, and then again on their way back south during which time they tend to linger a bit longer.

WHERE: Western Sandpipers can be found all along our region’s beaches, often in flocks of hundreds or thousands. In the mudflats of Jensen’s Bay and Maltby slough they often congregate in even larger flocks of 10,000 – 20,000 birds, and sometimes many more – flocks of 50,000 or more are remarkable but not unprecedented. Collectively, the beaches and mudflats around Tofino are recognized as the Tofino Wah-nah-jus Hilth-hoo-is Mudflats, a Western Hemisphere Shorebird Reserve Network Site.

WHEN: Shorebirds of one species or another are present on our shores year-round, but the bulk of the birds we see in any given year are Western Sandpipers that pass through in a narrow window during the spring (Apr 20 – May 15) and then slowly trickle back during a longer stretch in the late summer (July – September). The huge wheeling flocks of birds that will impress and inspire even the most cynical and otherwise oblivious city slicker are to be seen during early May.

WHY: Migrating birds use specific (and limited) stopover sites like Tofino to rest and refuel during their migratory journeys. These are sites where food is superabundant and reliable year-to-year. There are only about a half-a-dozen major stopover sites used by Western Sandpipers between their breeding and wintering grounds. A typical Western Sandpiper might land here in early May after flying non-stop from San Francisco Bay 1,300 km to the south. This bird might weigh 20 grams upon arrival, but over a 2-3 day stop it will eat almost continuously, putting on something like 10 grams of pure fat before taking off to fly for another 48 hours straight before landing at the Copper River Delta in SE Alaska, 1,800 km to the north.

HOW: We are still learning what exactly shorebirds are eating to help them put on so much fat so quickly, but we suspect that Western Sandpipers are feeding on ‘biofilm’ – essentially grazing on lipid rich diatoms (unicellular algae) in the mudflats. We also suspect that certain sections of the exposed sandy beaches here are particularly rich in invertebrate prey. We are also trying to learn which birds within the global population use which sites, and how they might move between sites within and between years (or even over generations). Ongoing work with collaborators is focused on answering these questions with the hopes of understanding how we can ensure the long-term sustainability of the habitat and food resources these birds rely on here in Tofino, and elsewhere too.

So, there you have it. Whether it’s exciting or slightly disappointing that years of research can be summarized in about two pages, now you are more or less a shorebird expert too! The next time you are out on the beach and come across these marvelous and charismatic birds take a moment to let your imagination wander and consider what remarkable journeys these little creatures undertake. Give them a bit of space to feed undisturbed and wonder what it would be like to try and gain 50% of your body mass in 48 hours (before another 48 hours of fairly high intensity cardio!), or what it might be like to navigate across the open ocean or over the rugged coastline between here and Alaska.

Shorebirds are awesome even when you know nothing about them, but every little bit you do learn only makes them even more interesting and amazing!