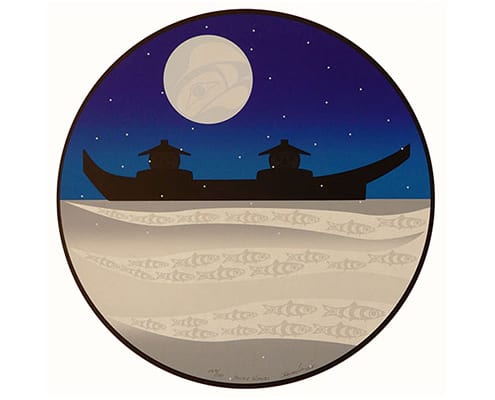 One of the best parts about life on the coast is that there is always something happening, and there is always something to look forward to. If you are into nature and wildlife, there is never a dull moment. Ask me to pick my absolute favourite time of year though, and my answer is always the same – Herring spawn! After a long, dark and stormy winter the days start getting longer, the air starts getting warmer, and then all of a sudden, it’s happening! First the birds show up, gulls and scoters by the thousands. Sea lions start cruising around in packs, patrolling the coast. The whales arrive, often the same ones in the same spots, right up against the shoreline. They are all here waiting for the herring to spawn. The fish themselves have been here for a while already after a winter offshore on the banks near the edge of the continental slope. Come spring, they start to school up in huge numbers often visible even from shore. From a boat in calm weather and clear water the effect is mesmerizing. Thousands and thousands of herring swirling around and catching the light, gulls and eagles swooping down to nab any that stray too close to the surface. It’s magical. And then right around the neap tides before the full moon in March, all these millions of fish spawn. Sometimes down deep, out of sight, sometimes right in the waves lapping on shore. The females collectively lay billions of tiny sticky eggs that adhere to whatever they land on while the males release clouds of milt, fertilizing the eggs and turning the water milky green in the process. Throughout it all, the adult fish as well as the eggs themselves are targeted by any and every marine creature able to take advantage of this all-you-can eat seafood buffet. For many species – Gray Whales, Brant Geese and Surf Scoters to name just a few – the herring spawn is a critically important chance to fatten up during a long northbound migration, and their arrival timed to coincide precisely with this annual phenomenon is no coincidence.

Pacific Herring populations have always fluctuated dramatically, largely in response to equally variable cycles of oceanic temperature and productivity that in turn affect the relative abundance of the plankton adult herring need to fatten up before they spawn. While there would have always been ‘good’ years and ‘bad’ years, there is no argument that populations have also been greatly affected by commercial harvesting over the last century. The dramatic declines and surges that are well documented over the last 70 years are both sobering and encouraging. While the West Coast Vancouver Island herring stock is currently depressed relative to recorded peak abundance (and almost certainly compared to what it would have been prior to a commercial fishery of any kind), the positive trend in spawning biomass over the last few years suggests that populations may yet have the capacity to rebound to historic levels of abundance should they be allowed to do so. Anybody with even a passing interest in herring or marine conservation should consult some of the fantastic resources your very own tax dollars have paid to produce to learn more about this fascinating species and its role in both the ecosystem as well as the economy (link below).

For those who want to see the magic up close, just keep your ear to the ground and your eyes on the water, and make the time to get yourself down to the shore to witness what is without a doubt one of the most amazing wildlife spectacles anywhere. It might be a sunny Sunday, or a windy rainy Wednesday – just make it happen! Good spots to check out the action in Barkley Sound include the shoreline at Salmon Beach, Twin Rivers and Mussel Beach, or anywhere along that stretch from the water. The east side of Vancouver Island also hosts a massive spawn and parts of Hornby Island, Denman Island, or the stretch of shoreline between Parksville and Qualicum Beach are often literally awash in herring or roe when the time comes. Check for local updates day by day. Herring are unpredictable and activity can quickly shift from one place to the next.