Witches, goblins, giant spiders and bats are among some of the characters associated with the frights of Halloween. Through the ages, bats have been vilified as blind, diseased, bloodsucking vampires. Their frightening reputation, however, keeps people form learning about the true nature of these vulnerable and fascinating creatures.

These nocturnal furry mammals perform invaluable ecological roles: pollinating flowers, dispersing fruit seeds and, in their role as predators, keeping insect populations in check. Having very few natural enemies, bat populations are most seriously impacted by human activity. Many bat species rely on ponds and marshes for foraging, trees and snags for roosting, and caves for hibernating. Increasingly, each of these habitat types is being changed or destroyed by human activities. To date, eight of BC’s 16 species are considered “at risk”.

In order to assist the planning of protected habitats and appropriate ecosystem management guidelines in Clayoquot Sound, the Scientific Panel and a local planning team commissioned an inventory of the resident bat species.

Discovery of BC’s endangered Keen’s Long-eared Myotis is especially significant because so few known locations of this species exist. It would be a real treat to spot him on your prowls on the eve of Halloween.

Did You Know?
Bats are the only true flying mammals.
Bats are known to live up to 30 years in the wild.
In some parts of Asia, bats are a sign of good fortune or fertility.
All bats are protected under the BC Wildlife Act.
Bats consume about half their weight in insects every night; an individual Brown Myotis, which weighs about 6 grams, has been reported catching and consuming up to 900 insects an hour. Maybe you should invite one of them to your next bonfire? 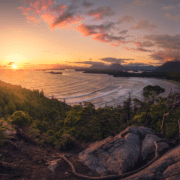 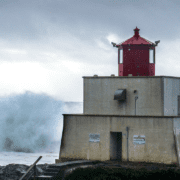